The Live Movie Experience has been presented at the US military service academies (like West Point and the US Naval Academy), US Army installations worldwide, NASCAR Sprint Cup teams, Teen Challenge Men’s Centers, Iron Sharpens Iron Men’s Conferences and just about any Christian denomination you can name. Through the use of major motion picture clips from “Saving Private Ryan”, “Rudy”, “Armageddon”, “Top Gun” and “Walk The Line” to name a few, men come away realizing that they are not the only ones going through challenges.  Using a strategic balance of Hollywood action movies, relevant current events, Biblical Truth and personal testimony, men become engaged with each other.

David Dusek’s mission is to encourage and equip men to live their lives for Christ. He utilizes his life experiences – including his upbringing in a non-Christian home, coming to Christ as an adult, and extensive business background – to reach men in a way that they can understand.  David’s vision is to engage all men where they are the “other six days of the week”—not just in church.

David is the founder of Rough Cut Men Ministries, which is primarily a live, interactive men’s experience using a strategic combination of action movie sequences, real-world current events, Biblical truth, and fireteam-sized discussion times with a single, laser-focused objective: To get men talking about what’s really going on in their lives.  David travels around the country, and the world, using the Rough Cut Men Movie Experience to get men to be transparent with one another and with Jesus.

David is a frequent keynote speaker at PromiseKeepers New Zealand, Iron Sharpens Iron Men’s Conferences, and denominational men’s conferences worldwide, and is the author of the Amazon #1 Best-Selling “Rough Cut Men: A Man’s Battle Guide To Building Relationships with Each Other, And With Jesus”.

He has presented Rough Cut Men at the United States Naval Academy, the United States Military Academy at West Point, Joe Gibbs Racing, to iconic Army units like the 101st Airborne Division, 7th Special Forces Group, and 1st Cavalry Division, and at numerous Army installations in the US, Germany, and Korea. David also works closely with dozens of Teen Challenge Men’s Centers across the United States and Australia.

A native of Florida, David resides in Sarasota with his wife, has five adult children, and two grandchildren.  In his free time, he loves dates with his wife, writing, and is a voracious reader.  He is also a diehard fan of Florida Gators football. 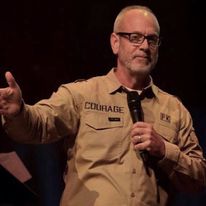 Most men are isolated. Most men travel alone.
And that’s right where the enemy wants us.